Willowdale - Drinks and Some Food (of course) 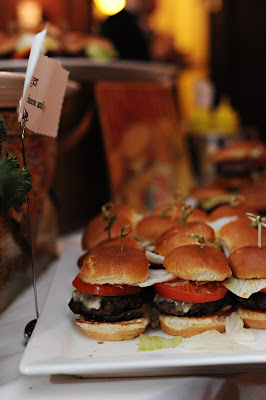 Nick and I knew, only a few short months into dating, that neither of us wanted a full sit down dinner at our wedding.  Instead, we wanted people to be up and moving around dancing and drinking the night away.  People were not going to starve - rather, we wanted a few stations and a bunch of passed hors d'oeuvres.

Knowing we would be having a full open bar I wanted to make sure people had plenty of yummy food that would set a good base for all the drinks to come.  During our cocktail hour we had 4 passed dishes ranging from twice baked potatoes to pecan crusted chicken tenders with a maple dipping sauce.  During the actual reception we had two passed dishes: a scallop wrapped in bacon and a lobster roll (I mean, we were in Massachusetts!)  In addition to the passed dishes we had a station of 4 different types of sliders, which should come as no surprise considering the slight obsession I have with burgers!  The sliders included straight hamburgers and cheeseburgers, as well as tuna and pulled pork sliders.   Finally, an hour after cake, the servers brought grilled cheese around as a nice little (almost) midnight snack!  All of the food was beyond delicious and I can say that from first-hand knowledge because I actually ate!  Willowdale was fantastic about bringing food directly to Nick and I throughout the evening.

One of the great things about Willowdale is that they have no liquor license, meaning that you can have a company like Kappy's deliver all the booze you think you will need and then some.  At the end of the wedding anything you don't use, Kappy's takes back and credits your account - super easy!!  The best part: the alcohol is actually cheaper than what you would see in the store.  In addition to the open bar, Nick and I wanted to have some signature drinks.  While Nick did a Dark and Stormy, I did a Rose Champagne and St. Germain cocktail.  However, instead of a strawberry or raspberry garnish, I found these Wild Hibiscus flowers to use instead that added a really fun and whimsical element to each signature cocktail.

These remaining photos are just some fun ones to showcase Willowdale itself and what a great evening it really was!  Again, thank you to our fantastic photographer, Holly Redmond, for the AMAZING photos!

At midnight we handed out metal noise makers to all the guests to help them get into the New Year's spirit.  Needless to say there was a lot of noise happening!  They were put to good use again at the end of the night when my brother had everyone gather and make a tunnel for Nick and I to run through while they were blowing their horns to spinning their tops - a pretty good exit if you ask me ;)

All in all, everything about the wedding was more than fantastic.  I hope everyone had or has a wedding and enjoys it as much as I enjoyed mine!
Posted by In and Around Town at 12:57 PM