Yesterday, in the midst of a little (more) snowfall, Nick and I had no problem being inspired to leave the house.  We had Lamb Jam tickets, and since the food was going to be there, so would we!  After having such a great time tasting so many delicious lamb plates last year, we had been looking forward to this year's event for some time.  We arrived just before 3:00 to be sure we would not miss out on anything.  Trying to balance plates, drinks and a camera, I ended up focusing more on eating and drinking, but I managed to grab a few quick shots, including one of the overall winner!

Enjoying all things lamb also meant getting a great Q&A with Lisa, owner of North Star Lamb Farm, while the chefs of Tavolo broke down a whole lamb in real time - quite impressive to watch.  There were some really good questions and comments about how best to prepare certain cuts of meat, as well as hints on how to get the most from your own lamb cuts.

Email ThisBlogThis!Share to TwitterShare to FacebookShare to Pinterest
Labels: Around Town, Lamb

Skiing in Utah - Solitude and Snowbird

Switching gears a bit and heading back to Utah, after spending a great day exploring Park City and Sundance it was time to do some skiing!  You cannot go all the way to Salt Lake without getting to the mountains.  Amazingly, unlike Denver, great skiing is only about a half hour away from the city!  There are so many mountains, big and small, in the canyons east of the city.  Having not skied yet this year we were excited, but actually merely hoping for some good conditions.  Since we're used to East Coast skiing, heavy powder might have done us in after a single run!

Our first day was spent at Solitude, a small(er) mountain compared to some others, but still over 10,000 feet!  This mountain seemed more like the local hidden gem.  With no lines at the lifts (ever) and amazing varied terrain its easy to see why locals flock to this mountain.  The fireplace at the lodge definitely doesn't hurt either!  Our guides picked a perfect "get back our sea legs" mountain.

After the sun went behind the mountain the temperature dropped and it was time for us to head home.  Solitude was a great mountain and loads of fun.  This was a great place to ditch the crowds and enjoy great skiing.

After an easy evening at home with some homemade pizzas, wine and bananagrams (Sundance was a late night!) we woke up early and were off to the famed Snowbird.  I had heard stories of their bowl skiing and the cat track, but seeing it in person was awe-inspiring.  The front side of the mountain did not have any sun so we headed straight up to the top to head to the bowls on the back side.  I literally gasped when we got to the tipy top because it was just so beautiful.

What looks like a lake in the photo above is actually the cloud cover that settled over Salt Lake - aka, inversion.  The inversion makes the city freezing cold because it traps the cold air in and doesn't let any sunlight (warmth) into the city.  While it made for chilly evenings, the views of it from the warm, sunny slopes of Snowbird were so cool.  In general, the views from the peaks of Snowbird never got old - I took off the mittens to break out the camera a whole lot! 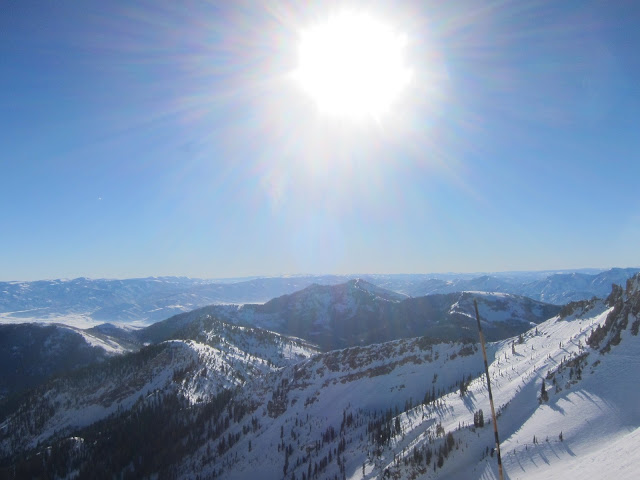 Snowbird and Alta are connected at the top.  However, Alta only allows skiers - no snowboarders.  I am not sure how different the terrain is, but if you are in a skiers-only group, the mountain sells combo passes that allow you access to both mountains. 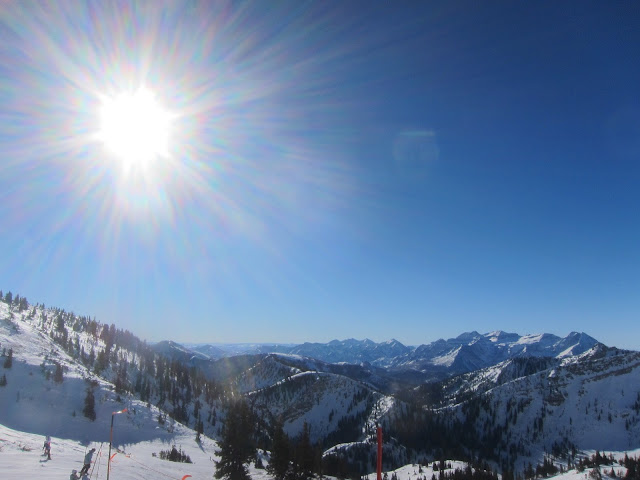 When you ski the Snowbird Mineral Basin bowl, there is a narrow cat track that goes around the top and takes you to the less steep areas of the bowl.  That in and of itself is nerve racking!  Having gone pretty close to the end before dropping in the first time around, I will say I got much braver a few runs in and definitely dropped in on the steep side and worked my way around what turned out of be the rocky parts.  There are trees in that photos, but you can make out some of the skiers, which just shows the scale of how big that bowl is!  Makes for an impressive picture, that is for sure!

Skiing in Utah was so much fun!  Its proximity to the city and its laid back attitude make it super  welcoming.  I have skied Vail, Keystone and Snowmass in Colorado and none were as easy going and simply fun as both Solitude and Snowbird.  The locals and visitors all had a great time together.

If you are looking to head west for some skiing, I would highly recommend checking out Utah.

Rarely in Boston do we have restaurants that have a no reservation policy, long waits, and lines of potential customers two hours before opening.  To find such a restaurant in East Boston is even more uncommon.  However, local Boston favorite, Rino's Place, was thrown into the limelight by Diners Drive-in and Dives, and the waits are now two hours and counting.  My brother, a huge "Triple D" always has Rino's high on his "to-do" list when he comes to town.  After putting him off for a few trips, it was time for us to suck it up and deal with the wait.

We arrived at about 6:30 and were told that it would be about a two and a half hour wait - not unexpected for a Saturday night, but still a bit much to think about!  Since Rino's is small and not that close to other businesses, they took matters into their own hands and opened Prima E Dopo (appropriately meaning "before and after") across the street.  We headed over, grabbed some bar stools, and prepared to enjoy some cocktails and appetizers while catching up with my brother and our friends.

After sampling a craft beer or two, we started to get a bit hungry (it had been 45 mins) and heard that the Shrimp Scampi Bruschetta was totally worth ordering.  My iPhone photo does not do it justice at all - this was amazing, and the thick bread supported the massive amount of cheese, shrimp and sauce overtop.  The portion was enormous, and more than enough for our group of 5 to share.  Prima E Dopo is definitely worth a trip to East Boston itself, even if you aren't trying to go to Rino's!

Email ThisBlogThis!Share to TwitterShare to FacebookShare to Pinterest
Labels: Restaurants

It all started so innocently.  The snow began to fall mid-afternoon on Friday.  We went out (walking) to a friend's house at about 7:30 and there was only about 4 inches of snow on the ground.  There was a bit of wind, but not too bad - nothing us New Englanders can't handle.

When we woke up on Saturday, however, it was a winter wonderland!  There was a solid 2 to 3 feet of snow on the ground.  Cars were buried and the roads were just a mess.  That morning we had some pancakes and coffee and enjoyed being snowed in.

There were only foot prints heading down to the main road that would eventually turn into sledding hills :)

Email ThisBlogThis!Share to TwitterShare to FacebookShare to Pinterest
Labels: Around Town

Sometimes I find a bunch of random things in my kitchen, and the best thing to make them come together is pizza!  Tonight was one of those nights: we had kale, onions, brussel sprouts, and sweet potatoes on hand.  Through in some dough and cheese and you have a pretty hearty and flavorful dish.

Preparation was pretty easy for this pizza.  I first sliced the sweet potatoes and onions and tossed them with salt, pepper and a bit of olive oil to prep them for roasting.