I gave you all a hint of my trip to Utah, but here is just the first of a few posts on our full experience!  Our friends Amanda and Noah, who are new-ish residents of Salt Lake City, had dibs on tickets to the Sundance Film Festival.  While we had tickets to two different films, one of them overlapped with the Patriots game, so we gave those to a non-New England group (which now seems like a poor choice, but hindsight is always 20/20, right?).  Amanda also got us tickets to the shorts programs, which started at 11:30pm, leaving us with plenty of time to explore Park City.

Email ThisBlogThis!Share to TwitterShare to FacebookShare to Pinterest
Labels: Adventures in Travel, Utah

After spending a week at Club Med, I once again fell in love with their infamous White Chocolate Bread.  At the time I just assumed this would be too difficult to replicate at home.  However, after a bit of interent searching, I realized making this bread at home was not as far fetched as I originally thought.  Love and Olive Oil had attempted the White Chocolate Bread and seemed to have some good luck, so this was my attempt at bringing vacation home to Boston.

Sometimes when I'm walking around the Back Bay and hungry, I want something quick and easy.  However, the food court at the Prudential Center leaves me a bit wanting and I always end up spending a more money than I necessarily want to at one of the many restaurants in the area.  Recently I was walking up Dartmouth and decided to hit up b.good, a restaurant that prides itself on serving "food made by people, not factories."

b.good has signs on the wall that share the names and stories of the people who produced the food you are eating that day.  It's great to eat good food while supporting local farms - all for a decent price point.

Sundance and Skiing in Utah!

Hello from Utah!  One of my oldest friends recently moved to Utah with her husband for work and naturally, Nick and I booked tickets out there to see them and do some West Coast skiing.  Turns out that this weekend, which just seemed to work best for us all, also happens to be Sundance Film Festival!  Needless to say that I will have plenty to recap upon our return to Boston.  For now, here is a quick photo... 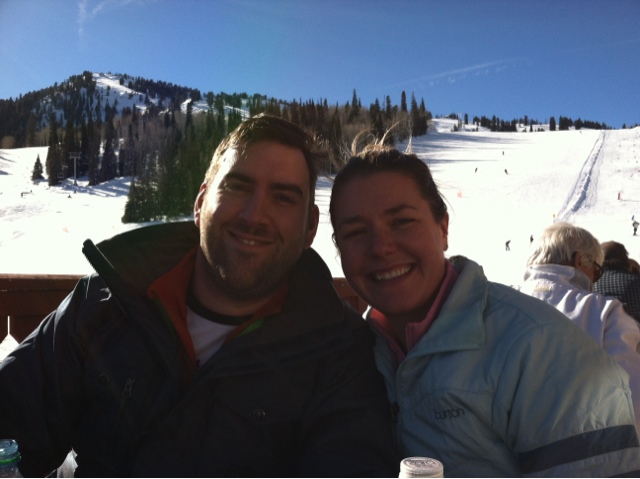 Have you skied out west?

I know most people have a go-to recipe they can whip up at a moment's notice.  Often, it seems to be some sort of cookie (and really, who doesn't love a good cookie?!), but my preferred cookies are too time consuming.  I do, however, love chocolately, fudgey brownies - they are my favorite!  Growing up, my mom had a recipe box filled with index cards of family recipes.  One of those was my aunt's brownie recipe that I would reach for time and time again.  Simple ingredients, one bowl, and delicious results - not much more is needed!

Even though we moved to Charlestown, it definitely has not stopped us from heading to Back Bay and the South End.  One recent weekend we were running errands and found ourselves on Tremont Street and hungry when we passed Kitchen.  Having heard good reviews, and having spotted lobster grits on the menu, we headed down the stairs.  Only after being seated did I learn that Kitchen is part of the group that also owns Grotto and Marliave.  Both are delicious, so I knew we would be in for a treat.

When reading the cocktail list (it was after noon, after all!) the mulled wine immediately caught my eye.  The beverage arrived warm at the table in a snifter that caught the aroma so that you smelled the drink even before tasting it - perfect for this chilly day.

Let me first start by apologizing for the unintentional blogging break!  With the holidays, the move, and life in general, blogging took a bit of a back seat.  However, in an effort to share some great recipes and restaurants, I am back on the blogging wagon.

Even though Nick and I had been in our new place for less than a month, we decided it would be fun to host Christmas!  On the menu for Christmas Day for our group of 8 (!) was beef tenderloin from Butcher Boy (one of the best places ever!).  Wanting to mix it up a bit on Christmas Eve, and since it would only be 4 of us, I decided to use the last boneless leg of lamb from the Tri-Lamb Group - yes, it made the move too.

Having cooked with the meat previously, I knew it was flavorful on its own and could just be roasted with a simple marinade.  Originally I was going to do some mustard, garlic and rosemary and go from there.  However, after speaking to a co-worker who shares my love of lamb, she mentioned that our very own Julia Child had a delicious and simple lamb recipe in her Mastering the Art of French Cooking that included soy sauce of all things!