At Least There Was Good Food....

In the wake of last night's depressing outcome, the one thing I will be focusing on is the delicious food Nick and I spent the day preparing.  One of the fun reasons to have some friends over for the Super Bowl is the excuse to prepare some dishes you probably would not otherwise prepare!  So, for the past two weeks I was trolling the internet looking for some inspiration dishes and came up with the following (forgive my Instagram obsession)...

First up was a Cheesey Pepperoni Pull Apart Bread that I adapted from Jen's Cheesey Mushroom Bread, as I have a friend who is not a mushroom fan.  This recipe was easy to pull together and very satisfying to put on the table with the "ooo's" and "ahh's" it received.  With its adaptability to almost anything this will quickly become a go-to appetizer.

Next up was Megan's Buffalo Chicken Stromboli, adapted to add a lot more heat!  I doubled the amount of Frank's Red Hot and allowed the shredded chicken to sit in all of the sauce not taken up during the sauteing to make sure all the chicken was sufficiently ready to burn tongues!  If that were not enough, I picked up this great buffalo Cheddar at Whole Foods that even had bits of jalapenos added to it!  Needless to say the Stromboli had plenty of bite - good thing we had friends over who love spice as much as Nick and I do.

Nick whipped up some Cake Batter Rice Krispy Treats that I had seen floating around on Pinterest, however, I am not sure the extra cake batter made enough of a difference.  Maybe the sprinkles would have made the difference. 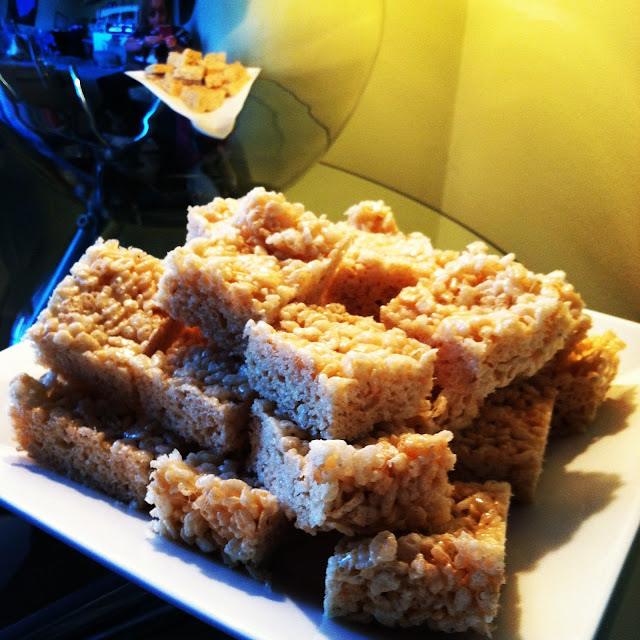 I decided to also go ahead and make Joanne Chang's Milky Way Tart from her Flour Cookbook.  I will do a more detailed post on this later, but lets put it this way (spoiler alert!) - the tart was everyone's favorite dish.

I can't say there was much to celebrate at the end of the night for us Pats fans, but at least the food was good and good company....
Posted by In and Around Town at 9:35 AM