Wedding Invitations - Wading Through the Masses

After Nick and I had finally sent out our Save the Dates, it was time to start cracking down on the actual wedding invitations.  We did not have a whole suite of invitations planned for our wedding. 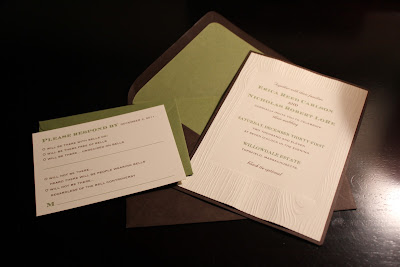 The plan was to be a bit more fun with the Save the Dates and then keep it classy for the invitations.  While we wanted to evoke some of the magic forest feeling of Willowdale, it was tough!  For cost reasons we had no intention of doing letterpress invitations - digital printing was fine by us.  However, we still wanted the invitation to look expensive, even if it wasn't letterpress expensive.

We paged through numerous magazines and websites to try to get ideas, and popped into more than a few stores.  In trying to evoke the spirit of winter/New Year's Eve it is easy to get kitschy quickly, and finding the right balance was hard.  At first we thought we had found a couple options that would work, but after sleeping on it they just were not the right look.  Then when we had found a few a few options we liked the look of, we ordered samples and realized the quality was not cutting it.

On a whim we stopped in at The Paper Source on Boylston Street, thinking we could flip through their albums and see a lot of options.  They have at least 6 enormous albums to look through as well as a variety tacked up on the wall for inspiration.  We hadn't stopped in earlier because we figured their invitations would be a lot more expensive than other outlets, but (luckily we were wrong).  As we were flipping through the albums, one invitation suite tacked up on the wall caught both of our eyes: a simple cream color with a wood grain imprint border surrounding the type.  The wood grain evoked that woodsy feel in a clean and simple way that we had not seen anywhere to date.  Even better the paper itself felt and looked really nice.  Better still, even though you can customize colors to match your wedding, the samples were the perfect combination for our night!  While we held our breath on the cost, the result was not bad, and was similar to some of the vendors we had seen online.  Our suite included the invitation, an espresso-colored backing to the invitation, espresso-colored envelops, moss green liners, and reply cards with a moss green return envelop.  While we were planning on assembling the backings and invitations, Paper-Source ended up doing it for us.  The envelope liners we did ourselves with the help of a lovely (and krafty) bridesmaid: over 130 completed in about an hour - not bad! 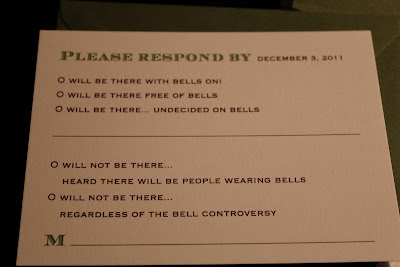 Our wedding was not a sit down affair, so really all we needed on the RSVP card was how many people were coming, but we thought that was too boring.  I happened to stumble across a few fun examples online, with one asking guests what they were most looking forward to and picture options depicting either dancing, drinks or food.  But since it was the holidays this "bell-themed" one was too perfect.  I say that" I will be there with bells on" fairly often in real life, so it seemed like the right choice!  Luckily most people got the joke, and we only had a few confused phone calls.

One learning experience I will pass on: if you are planning on having your envelopes addressed by hand and you have brown or other dark-colored envelops, you obviously have to go with a white or cream colored ink, and many calligraphers charge extra for using any color other than black. When you have the front of the envelopes and return addresses to do, any extra charges can add up quickly.  Luckily, Nick did some searching and found Ashley Osgood of Ash Tree Creations, who did an amazing job and was easily offering the best prices we had seen.  Even better, her penmanship style was fantastic!

We were really happy with the way everything came out, and while we tried to keep it classy, we did add some fun elements to try to continue to set the tone for what people could expect on the evening of the wedding.  We even had a few people show up with actual bells on!
Posted by In and Around Town at 9:29 PM