In Crete - Chania to Heraklion: Palaces, Ruins and a Winery

After enjoying some fantastic beach days in Chania, we had to travel to Heraklion, a port city in Crete.  Driving in Crete was an experience to say the least.  We had to travel on the one and only "highway" to get to Heraklion, a large two lane road with big shoulder lanes.  Turns out, those shoulder lanes are actually travel lanes where slower drivers (ie, cars traveling the speed limit) stay while the rest of the world passes them, to the point where there can be three cars all passing each other!  The drive itself was beautiful as most of it was along the coast and beautiful flowering bushes lined the roads - it all made the two and a half hour trip go by pretty quickly.

Rather than going directly to our hotel we stopped at Knossos, which is an ancient Minoan palace.  Interestingly the location of the palace was known for a while during the Turkish occupation of Crete but it was somewhat hidden as a result.  Not until Crete gained its independence did the unearthing of the palace begin. 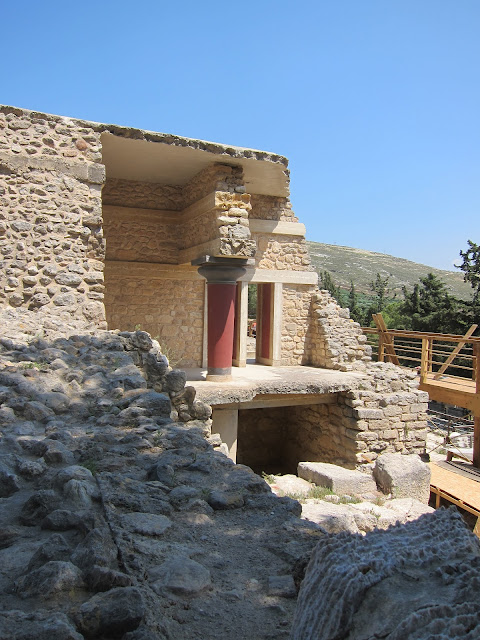 There has been some criticism of the excavation process because rather than just digging out the remains there have been attempts to restore the palace to what it may have looked like - they added walls and colors that would have been common at the time. 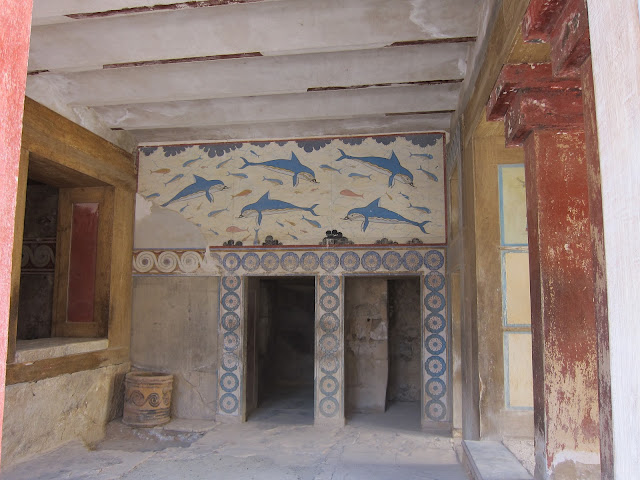 Certain of the mosaics are on the walls but most of them are replicas. 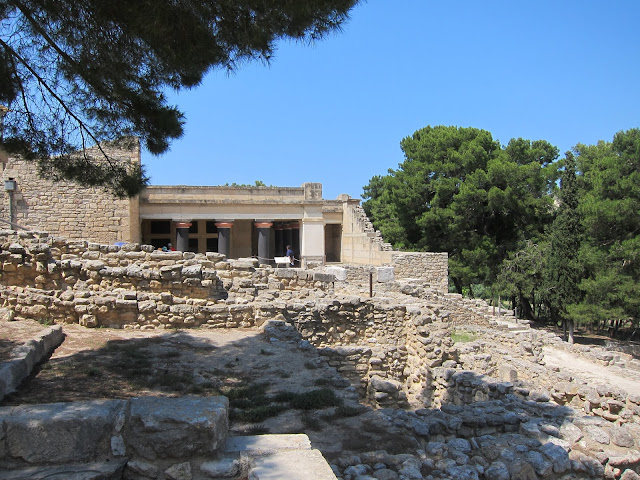 Replicas or not, the overall effect is impressive.  The grounds all over have the remains of the walls, vases, etc.  They have done a nice job of making stairs and walkways for the tourists so you can get into most areas and get the best experience. 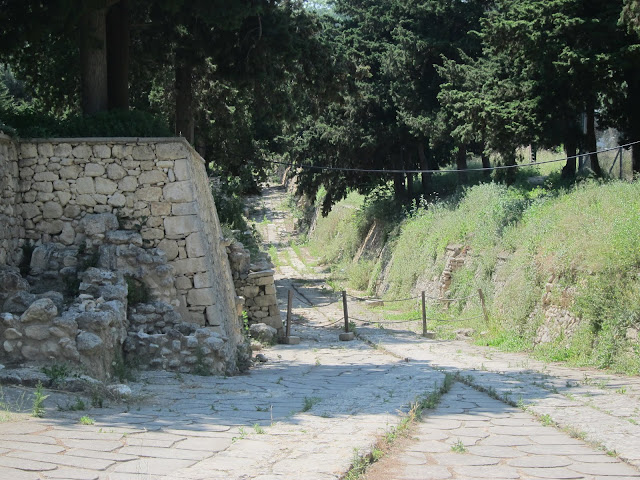 The above road is what is thought to be the road taken to Heraklion for the people living in the palace.  This must have been a pretty big adventure - its at least a 20 minute drive!

On our way to the Palace we saw signs for a vineyard, and with some extra time on our hands we figured why not - we heard the vineyards in Crete were actually pretty nice.  So, we set out from the palace in search of Stilianou Wines.  With the winding roads the vineyard seemed to be further than the 15 km on the sign.  As we continued we got higher and the roads narrowed to the point I actually wondered if it was all and scam and whether there was going to be a band of gypsys waiting for us at the top of the hill!

The view at the top was completely worth the climb.  You could see all the way to the water and everything in between was grape vines and olive trees, perfectly cultivating the hill sides. 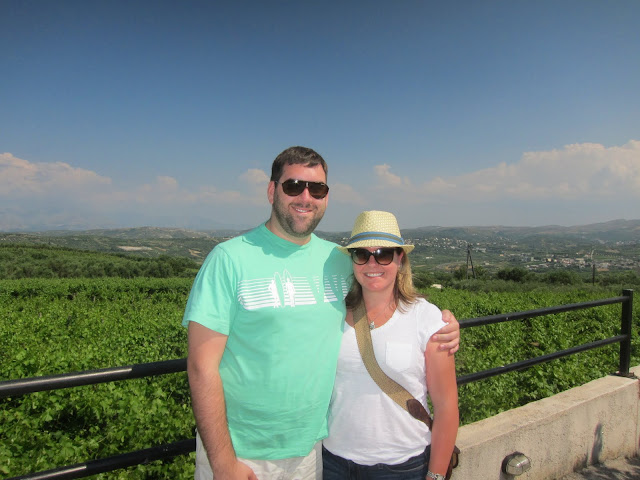 We were greeted by the extremely friendly owner who was more than happy to give us a tour of his operation.  They have an impressive room filled with with stainless tanks where the wine ferments, and to the side there are grape presses, bottling stations and labeling machines.  It seemed like a pretty big operation for a family run business.  After looking at the technical side of things, we were brought down to the cellar where the bottles and barrels are stored.  It was a beautiful room complete with a well set table and wrought iron chandeliers. 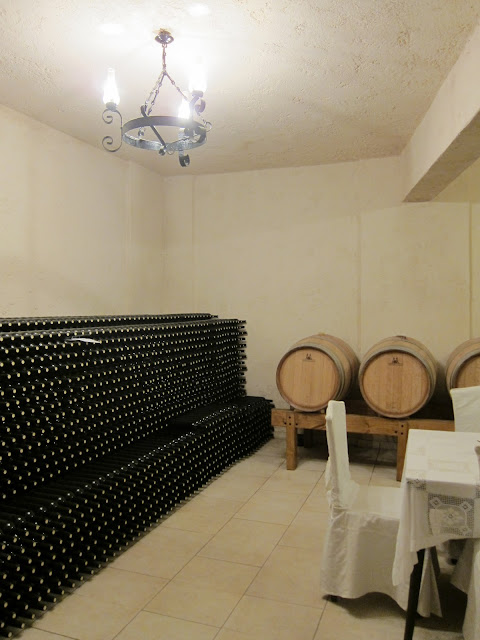 Upon coming up from the cellar we sat down at another table where we helped ourselves to bread-sticks and fresh olive oil - cleaning the palette for the tasting.  We were served reds, whites, roses and dessert wines.  This is where we officially learned that the wines of Greece are all pretty sweet- dry wine does not seem to really exist in Greece!

After we finished the tasting and signed the guest book we headed back down the hill to Heraklion to find our hotel.  We had a vague idea of where to go, knowing only that it was near the port - lucky for us, Lato hotel has a big sign on the roof which made it easy for us to find.  By the time we got ourselves situated it was getting to be sort of late and this city is just starting to get rehabbed.  Rather than head out an explore, we stuck to the views at the Lato's rooftop restaurant, Herb's Garden.

Like Chania, the town has a sea wall that you can walk along and explore, which was perfectly seen from our table.  We were immediately served bread with tzatziki and an olive tapende. 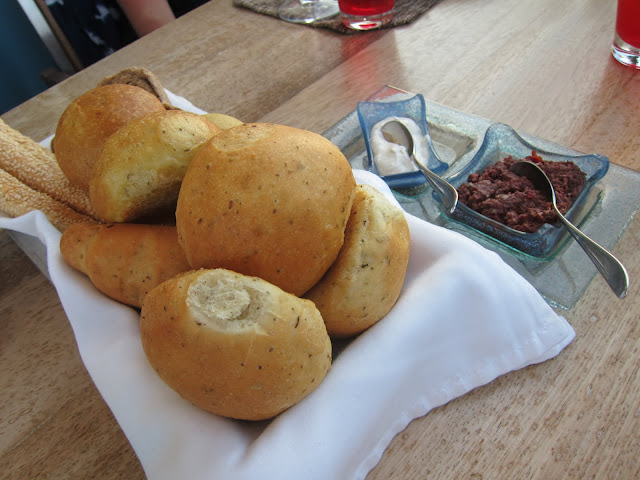 To start we got Crispy flaky fillo rolls with kefalograviera (a spicy and sharp Greek cheese), with basil and semi-dried tomato sauce. 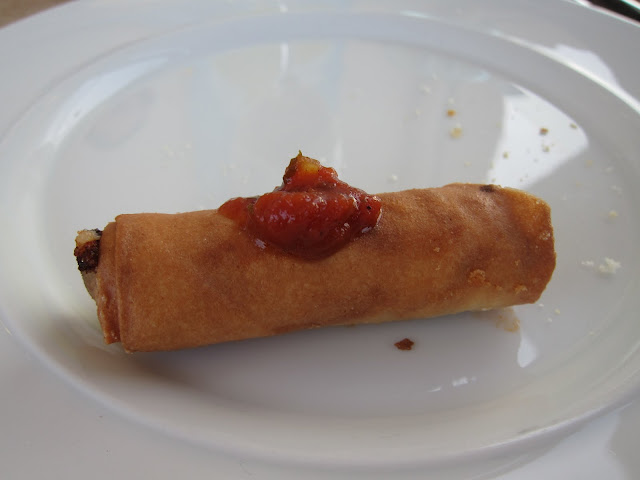 The fillo roll was basically a Mediterranean egg roll - whats not to love?  We also got the baked bread rolls, filled with smoked eggplant, tyrozouli (a semi-hard goat local cheese) and aged balsamic dressing. 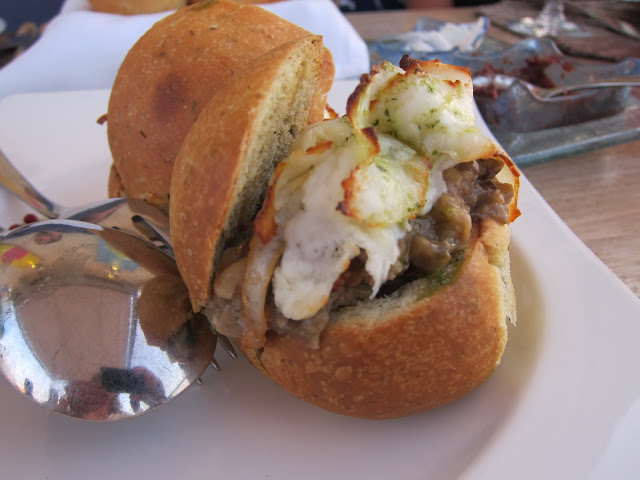 Everything seemed like this should have been a great dish, but there was some flavor that didn't quite fit with the eggplant.  For dinner I got the Capelleti (fresh pasta) with graviera, mizithra (local cheeses) and nutmeg, prepared in veal broth, served with mild tomato sauce and xinohondros (Cretan slightly sour bulgur). 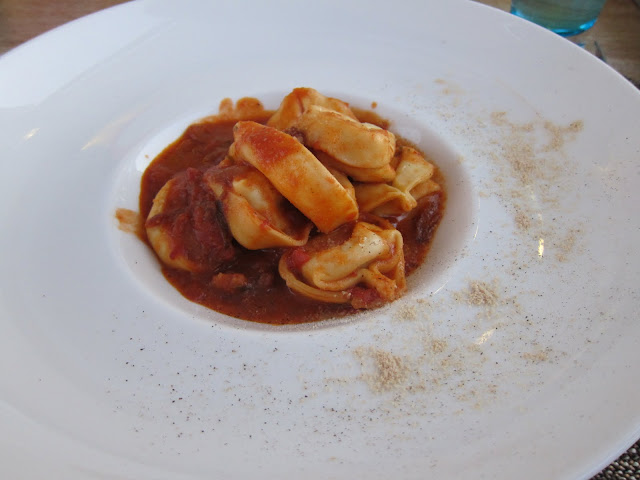 The dish was good.  I was hoping for stronger flavors to come through, but it was still tasty.  Mike got the Calamari on the grill, filled with Santorini Fava and sweet onion. 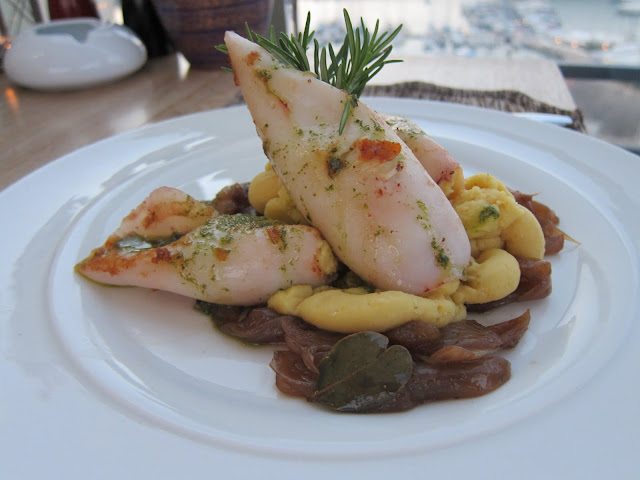 Erica S. got the shrimps (love that all the menus in Greece said "shrimps"!) on the grill with ripe tomato marmalade and grilled zucchini with fresh coriander.  Even with the wholly served shrimp this dish came together really well. 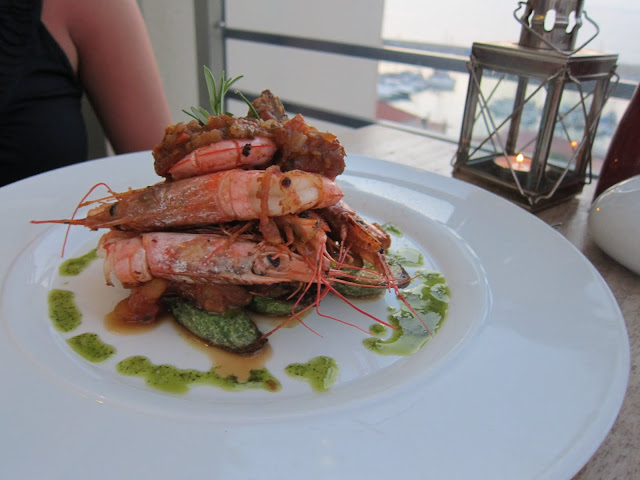 Nick got the lamb bites wrapped in grape leaves, served in a parchment paper pouch with graviera (hard local cheese), sun-dried tomato and fennel, and served with baked potato purée.  This dish was the winner of the group in my opinion.  The lamb was tender and tasty.  The fennel turned me off from ordering but the flavor was mild in the final result. 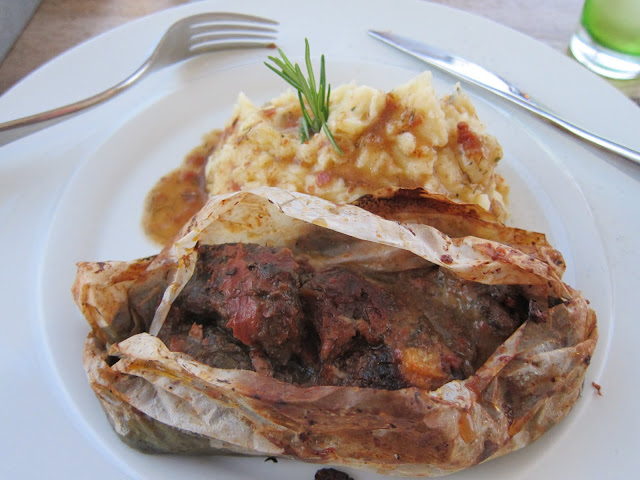 For dessert we made two selections, and then the restaurant ended up giving us an extra dessert on the house!  The lemon creme was refreshing, and the complementary tiramisu was tasty, but the warm and moist dark chocolate soufflé with fresh mint ice-cream stole the show.  It was exactly how it was described in the menu - warm and moist, and the molten chocolate in the center flowed out.  I could have eaten it for all three courses of the meal!  Not being a mint person I didn't go for the ice cream, but was told it more than satisfied a craving. 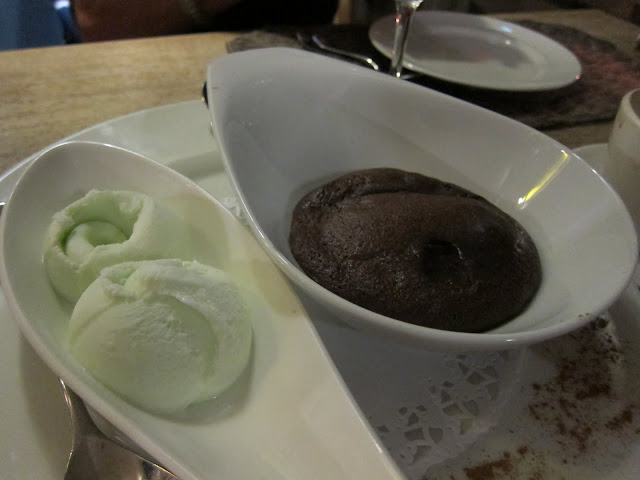 After dinner we headed to the other side of the restaurant to enjoy the lounge area with a couple of beers before turning in for the evening.  We wanted to make sure we were well-rested for our ferry trip to Santorini the next morning!

Email ThisBlogThis!Share to TwitterShare to FacebookShare to Pinterest
Labels: Adventures in Travel, Greece