For some reason, this fall I have been on an apple picking mission.  I haven't been on a true apple picking trip since elementary school, and I decided that this was my year to change that.  Given Nick's attachment to Smolak Farms and the two amazing Whim Dinners we have been to, we figured it was time to see the farm during its peak apple picking season.

We arrived at Smolak Farms at around 10:30AM and while the Farm was crowded, there's plenty of room to spread out, so it never seemed too bad.  Shortly after parking, we walked directly to the Antique Orchard that had many varieties of apples not generally sold in stores.  It was about $5 more for a peck bag than the standard Macintosh/Cortland orchard, but it was so fun to get to taste so many apples!  In addition to Macs and Cortlands, the Antique Orchard featured varieties like Pink Ladies, Northern Spy, Winter Banana (which actually taste a bit like banana!), Smokehouse and Sheepnose.

We had tons of fun walking around the orchard and (shhhh!) tasting all the apples.  I think by the time we finished picking, I ate about 4 apples - they were just so fresh and delicious right off the tree! 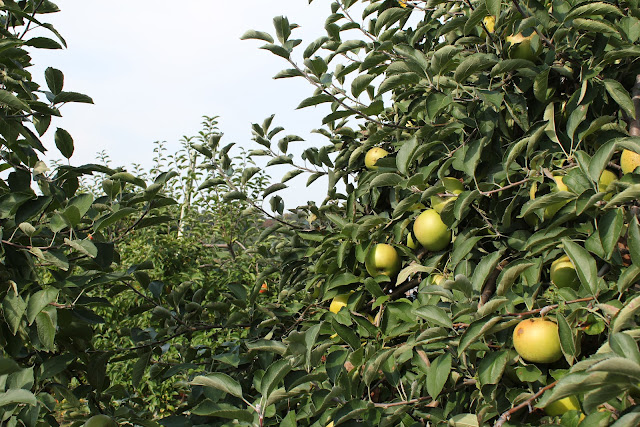 After filling our peck bag with loads of apples, we went up to the farm stand to indulge in some of their sweeter offerings.  On our way there we saw a pumpkin tree!  I did check: the pumpkins were tied on.  I knew pumpkins grew on vines, but they looked so natural on the tree that I had to be sure!

After going to the bakery and picking up some sweet treats, another half peck of cortland apples (for baking) and some apple cider, we grabbed a seat in their greenhouse and relaxed while enjoying their amazing apple cider donuts!

In addition to apple picking, families were going through the pumpkin patch and checking out the petting zoo.  We picked up some Indian Corn for our front door (it was about time we replaced the summer wreath).  The weather was perfect and it was fun to actually pick the apples off the tree!  Right after getting home, I set to work with some apple recipes that I will be sharing here soon.

We totally enjoyed our day and highly suggest heading for an orchard for some apple picking!
Posted by In and Around Town at 6:30 AM