When word got out that Craigie on Main's owner was going to open a new restaurant, it's safe to say there was some excitement. Craigie is known for so many things including its burger and the wonderful tasting menu. Kirkland Tap and Trotter is a warm restaurant, and while you will find similar ingredients as you may see at Craigie, the food at Kirkland Tap and Trotter is more approachable but still executed perfectly. 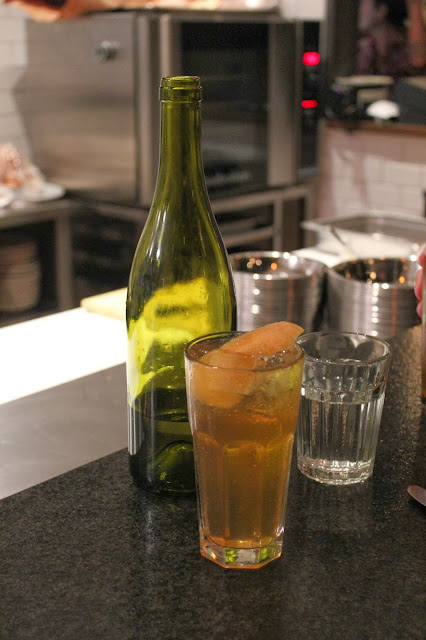 We got to the restaurant on the later side on a Saturday - since it was only 3 weeks into opening, it was the only time we could get a reservation! The restaurant was definitely a bit crowded and we were prepared to wait, but the hostess asked us whether we would be interested in sitting at the equivalent of a chef's table, which we gladly agreed to. For the evening we had a perfect view of the salad and dessert station, as well as a clear view of the cooks line!


The majority of Kirkland Tap and Trotter's menu is designed as shared small plates. While the menu is slightly smaller, it actually just made it less difficult to make my final selections! With three of us, we got a pretty good sampling of the menu, but I will say at 9:30, many of the items had already run out.


Nick went with the burger (I know, not me!). The grilled grass-fed burger is topped with provolone and a horseradish crema. The meat is flavorful and the horseradish adds a great accent flavor without being too overwhelming. While it is smaller than its Craigie counter-part, at $16 it is a bit cheaper as well.

Even though I am not a huge pepper fan, I still got the grilled Lamb Ribs served over bull horn peppers - I could not resist! The lamb ribs were cooked perfectly and were easily eaten right off the bone.  The lamb was lean without much fat to dig though, making it a pleasure to eat.

After to watching many of the desserts being made, we ultimately settled on sharing the Fruit Crisp with walnut streusel and vanilla ice cream and the Taza chocolate tarte with a bourbon cream. The fruit crisp was warm and highlighted the seasonal fruit, definitely Nick's favorite. My favorite was the tarte. Each bite was so filled with chocolately goodness and the cream just added a refreshing counterpart to the bite.

After only a few short weeks, Kirkland Tap and Trotter is well on its way. They are definitely still working the number of dishes as well as some things among the line chefs (a few apparent dust-ups occurred during our dinner). I have no doubt this will become a regular go-to for Nick and I as well as many others in the area.