Back in July Nick and I had a wedding to attend in upstate New York.  Since it was going to be a long weekend of driving, we decided to take an extra couple of days and visit Cooperstown, New York, famously know as the home of the Baseball Hall of Fame.  I had only been once before and Nick had never been, and since it was only an hour from the wedding venue we figured a little Americana was good for the soul and went for a visit!

After spending the day walking through the Hall of Fame (post to come!), we had some time to kill before heading down for the rehearsal dinner.  While Cooperstown is also home to James Fenimore Cooper and a number of museums to prove it, we had also heard rumblings of a local brewery, Ommegang, that was worth visiting (although neither of us had heard of it before this trip).  Given the option between the Farmers Museum and a Brewery, we made the obvious choice and went with the brewery (though, to be honest, I was tempted by the petting zoo!).  After about 20 minutes of meandering through the narrow upstate roads (luckily having some GPS signal for guidance) we arrived at Ommegang and were completely taken aback by the brewery complex!

This was an official brewery that had more than just tours to lure guests for a visit.  Between the indoor and outdoor cafe areas, gift shop and tastings, I was a happy camper!  Turns out the brewery also holds a number of concerts throughout the summer in their back field, which is naturally shaped like an amphitheater.  With names this year like Darius Rucker, Wilco and Bon Iver, the location draws a big crowd.

After discussing some tour times with the front desk we knew were were going to have a bit of a wait, so we grabbed a couple of seats at the bar and enjoyed some beers.  After looking at the menu, I wished we hadn't settled for a quick meal in Cooperstown because they had a number of delicious looking options here.

Ommegang Brewery actually started as a Belgium import company back in the 80's when the founder came back from spending time abroad and fell in love the Belgian beers.  However, due to taxes and a number of other costs (who needs Belgian when you have American brews!?), it was hard to sustain the input business, so he decided it would try his hand at brewing the beer himself.  Thus, the import company became a brewery.  The brewery is fittingly built on an old hops farm!  To get the brewery going, the founder looked to his inspiration, Duvel, for some of the start-up funds.  Talk about being legitimized early!  To boot, Ommegang became the sole importer of all Duvel-owned beers as well, including La Chouffe, which I sampled (and fell in love with) during our wait in the cafe.

Shortly before our tasting was to begin, we looked around the gift shop because we already knew we were going to be bringing some beers home, including the specialty beer Nick had: the Beer D'Hougoumont.  It was recommended by our neighbors at the bar and they were totally correct - delicious!

After a quick hour, it was time to sample.  We were lead into a lovely bright, high-ceilinged space to taste what else Ommegang had to offer.

I think we got to try about 6 different beers during the half hour, and each one is better than the next (we went lightest to darkest).  We (and by we I mean I) were having trouble deciding which ones to bring back.  In the 5 minutes between our tasting and tour I continued to plot and see what else I could buy in the gift shop. 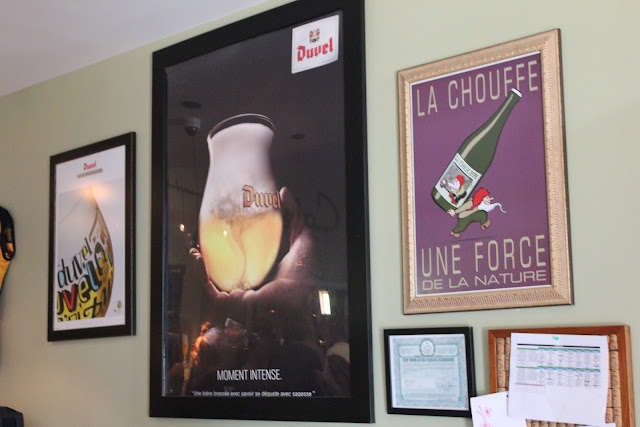 When it was time for our tour, our guide supplied us with some sexy protective eye wear because the brewery is operational.  I must say, this is the loveliest way to store goggles I have seen!

The tour was about a half hour long and very informative.  Ommegang puts a lot of time and effort into crafting their beers.  A couple of years ago, Ommegang wanted to expand and turned once again to Duvel for some money.  However, this time, Duvel actually bought them, so they are wholly owned by the Belgian company, so they are definitely a legitimate Belgian beer company even though they are stateside!  The brewery building is fashioned after those you would see in Belgium itself.

Nick and I are still enjoying some of our favorite Ommegang Brews, including the Abbey Ale.  Since we now know the brand we have been looking for it everywhere.  So far we know that the Yard House and The Gallows carry the Hennepin, which is one of their "lighter" beers.  I am definitely on the look-out though, so let me know if you know of places that carry some of Ommegang's other beers!

If you find yourself in Upstate New York, I highly recommend a trip to Ommegang Brewery - such a fun place!
Posted by In and Around Town at 6:30 AM