The weekend before Christmas, it just so happened that a number of Nick's college friends were in town visiting family. Since they are otherwise scattered across the U.S., we took the opportunity to get together for some dinner and drinks. Finding a table for a group of 9 on relatively short notice was a bit difficult, but luckily, new kid on the block Carrie Nation had availability for our group. Ironically named for an extreme prohibition activist who was actually known for taking her hatchet into bars and threatening the patrons, Carrie Nation (the establishment) has a great cocktail list and certain areas exude the speakeasy feel.


While there were a number of well-priced lobster dishes on the menu, including a BLT, Mac and Cheese and Pot Pie, I decided on the burger. Not that I ever really need to be convinced to get a burger, but truly it was the Great Hill blue cheese that caught my eye on this particular evening.

The burger was cooked a decent medium rare and the blue cheese offered a nice twist of flavor in each bite. The brioche bun was light and fresh. At $14 the price point is about average in the Boston area. All-in-all, a pretty good burger. 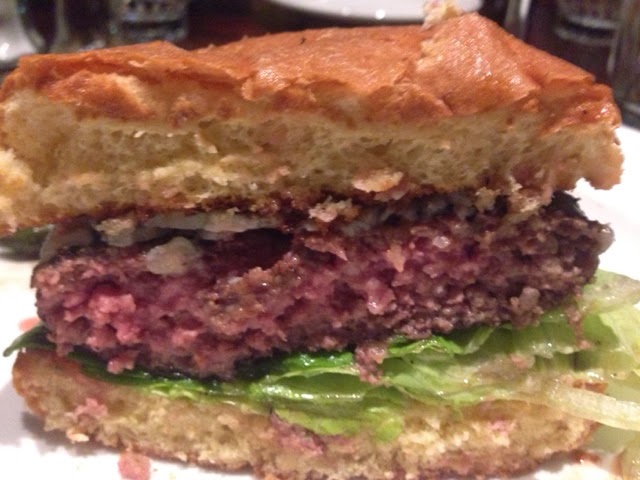 I do have to comment a bit on the service. I know we were a large group, but it took us well over two hours to get through our meal and. A lot of that time was waiting on our food, and our server put the blame squarely on us (because we "didn't make our minds up quickly enough," we apparently fell behind a bunch of other orders). Also, when asked about certain items on the menu, our server gave us a pretty curt response of "I don't know.  I don't eat pork." I totally understand if, as a server, you don't like or eat something on the menu, but I think it would have been preferable to at least offer the opinion of others in the restaurant or some of the feedback you've heard from other diners. From what I've read on Yelp, others have had some mixed service at Carrie Nation - I know the restaurant is fairly new, so hopefully these issues get worked out.

Overall, all of the lobster dishes at the table were pretty good.  he pot pie had a flaky puffed pastry that was over an inch in height when it arrived at the table! The one really failed dish was the beet salad, but really there are plenty of other menu items on the menu to tempt.

I didn't really catch the speakeasy portion of the restaurant until I went to the bathroom as that area really is hidden in the back. I think overall Carrie Nation is worth a visit. Service issues aside, the good food, really large bar and a loaded cocktail list would make this a nice after work destination.

After Carrie Nation our group headed to Highball Lounge, which is located in the old KO Prime space in the Nine-Zero Hotel. I had been wanting to stop by Highball since it had opened (only a few weeks ago) because of their viewfinder menus, cocktail list, and plenty of games to play while enjoying cocktails. As promised, upon entry the vibe at Highball was just quirky and fun. Because we were running late, all the larger couch areas were full so we only stopped in for a quick drink, but when the drink is the #duckierose, it deserves a blog post shout out!

Because I enjoyed our quick stop, I actually just went back to Highball with two girlfriends and highly recommend the tater tot nachos - they were pretty fantastic! Catching up with them over some drinks and playing Trouble, it was a really fun evening. Other games on hand include Jenga, Guess Who, Connect 4, Uno and (I believe) Candy Land. Highball is definitely a great destination for a fun night out.